Can You Hear the Voices at the Old High School 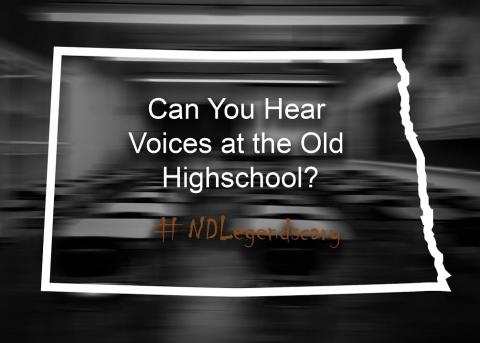 I bought this old high school in Traill County back in 1998. I never told anybody about the weird voices I’ve heard because I thought I was losing it! I only started sharing once others started to notice it, too.

Often times you will hear people talking in the old schoolhouse and it’s interesting how some people hear it clearly and others don’t. Last October, I had several guests over for cocktails. We were all sitting around a large table in a room on the third floor, just visiting and talking smart.

Suddenly there was a loud voice of a woman calling up the stairs. ”Hello? Hello! Are you up there?“

Half of the people around the table heard the woman very clearly, and the other half heard nothing. Some of my guests got up to go see who was there. I secretly giggled to myself. I had heard this woman’s voice before. I followed the guests to the staircase and explained to them that no one would be there. They were perplexed. I showed them that the doors were locked and there were no other cars outside. The guests didn’t stay long after that.

Another time some friends dropped in as they toured around the countryside for a birthday party. There were six of them. I have a small apartment in the building that I use when it’s cold outside (it’s much cheaper to heat). Everyone came into the little apartment and sat down to visit.

One of my friends mentioned the ghosts and asked if they would prove they were with us. (I generally don’t do that to the ghosts. If they want to be known, they do it on their own terms). Anyway, seconds after the guest asked for proof, all of the power went out in the room. The building is not hooked to the grid, it runs on solar. As everyone was sitting in the dark for a few seconds, the power came back on. There were some shocked looks on their faces. Then one guest asked the ghosts to do it again. And the power went out again! When it came back on, all of the guests promptly put their coats on and left.

Things happen pretty frequently around here. Sometimes it’s more than just hearing things, too. One morning I came out to the gym where I keep a few cars. The lights were all on and so were the doors. On the wall there was a shadow crawling horizontally across the wall.

I’ve grown pretty accustomed to stuff like that happening now. It’s just the status quo now and I’m hardly ever startled by it anymore.