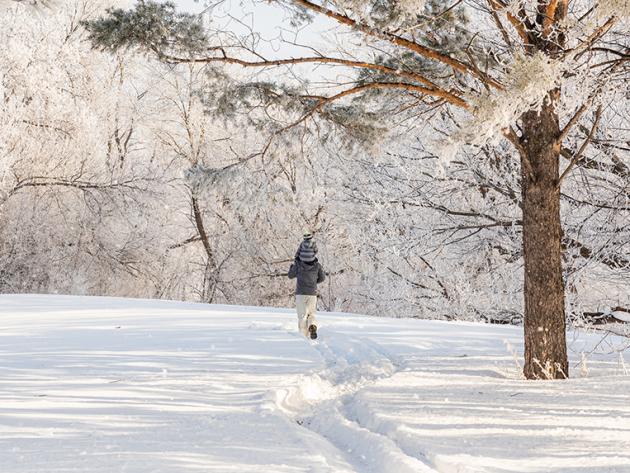 Winter is a beautiful time to enjoy North Dakota. Embrace the outdoor adventure and opportunities. It won’t last long, so take advantage of these North Dakota adventures!

Star Light, Star Bright, a Million Stars I See Tonight: North Dakota is among the best places to see the sights in the celestial heavens – northern lights included. Find a dark place, not hard in the countryside, then look to the skies and watch. On a clear night, millions of stars will twinkle and the northern lights will often dance across the horizon.

Open-Water Fishing: Wait. What? Despite below-zero weather, open-water fishing is available year-round at Nelson Lake near Center and the Missouri Tailrace at Garrison Dam.

Ice Fishing: When rivers and lakes throughout North Dakota ice over, avid anglers drill a hole and keep on fishing. Darkhouse spearfishing is just what the name implies.

the Maah Daah Hey Trail: A pair of snowshoes adds an interesting twist to a day hike in the Badlands. Strap on a pair to follow the trail up and down over buttes and through draws, stopping often to take in the scenery.

Ski Frost Fire: The downhill ski and snowboard area in the Pembina Gorge near Walhalla installed new lifts and is open again for skiing. Schuss or weave to your heart’s content before going inside to eat and warm up by the fireplace in the lodge.

Cross-Country Skiing at Cross Ranch State Park: This park is built for cross-country skiing with trails winding through the woods and along the riverbank. Deer watching intently and the cozy warmth of a yurt will complete an unforgettable day.

Ice Fishing Devils Lake: Can 33,000 anglers be wrong? Don’t worry, there’s plenty of room on this big lake, one of the top fisheries in the nation. Spend a day on the ice with a guide or by yourself. Catch your limit then do it again tomorrow.

Make it a Skate Date: Town Square Park in downtown Grand Forks is flooded every winter to make a skating rink - it is, after all, Grand Forks. Glide around with friends or family, then slide over to one of the city’s quaint coffee shops, pubs or eateries. Skaters also have a home among hikers and skiers at Icelandic State Park near Cavalier as the park added a skating rink to its winter offerings.

Lehr It Is!: It figures that a town centered in a land of small lakes would be surrounded by fish. Pothole lakes are stocked full of walleye, northern pike and perch. No need to crowd around, there are enough hotspots and comfortable lodging to accommodate everyone.

Where the Reindeer and Big Cats Play: The reindeer at Minot’s Roosevelt Zoo don’t pull sleighs, but they enjoy being out in the snow nonetheless. The snow leopards don’t mind if you come around either, nor do the Amur tigers, African lions or Kirk’s Dik Dik. Winter actually is a great time to see the animals active and out and about.

Snowboard Huff Hills: Get gnarly on the bluffs above the Missouri River. Ramps, kickers, rail, barrels and even stump jumping await on the terrain park.

Trade Stories at the Fort: Visit Fort Union near Williston to get a feel for winter living in a trading post on the Northern Plains. The reconstructed fort, called the “Grandest on the Upper Missouri” was a hub of trade between tribes and trappers at the confluence of the Missouri and Yellowstone rivers.

Tubing in the Mountains: When you get tired of skiing and snowboarding, pick up a tube and make some runs down the tubing park at Bottineau Winter Park in the Turtle Mountains. Race down and be towed back to the top over and over again.

Nature's Wonders: North Dakota can be visually stunning in the winter. Look for sundogs, ice circles on rivers and beautiful silhouettes created by hoarfrost.

Winter is Fun in North Dakota

Take a Hike This Winter in North Dakota