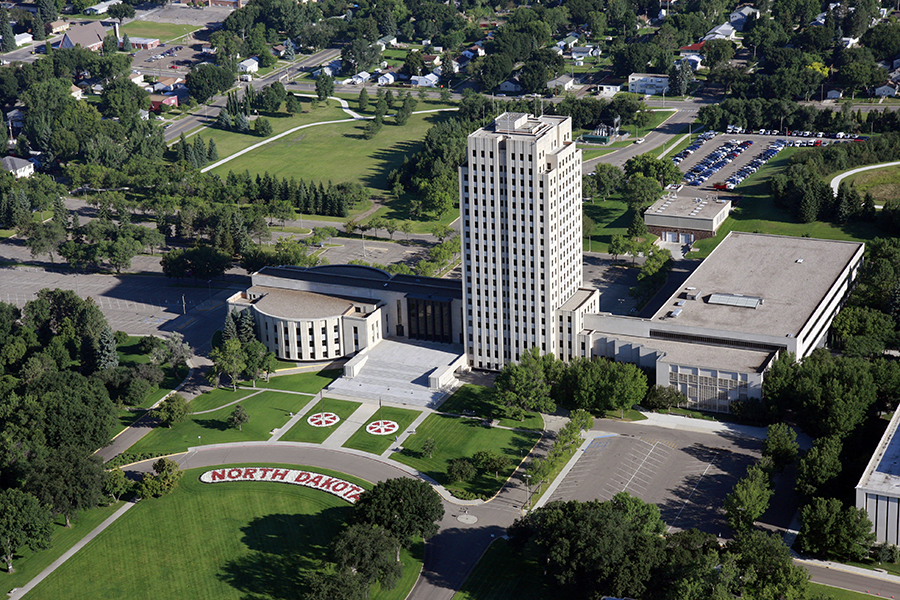 Did you know North Dakota's state fruit is the chokecherry? Read about this commonly found fruit and other North Dakota fun facts and figures below. 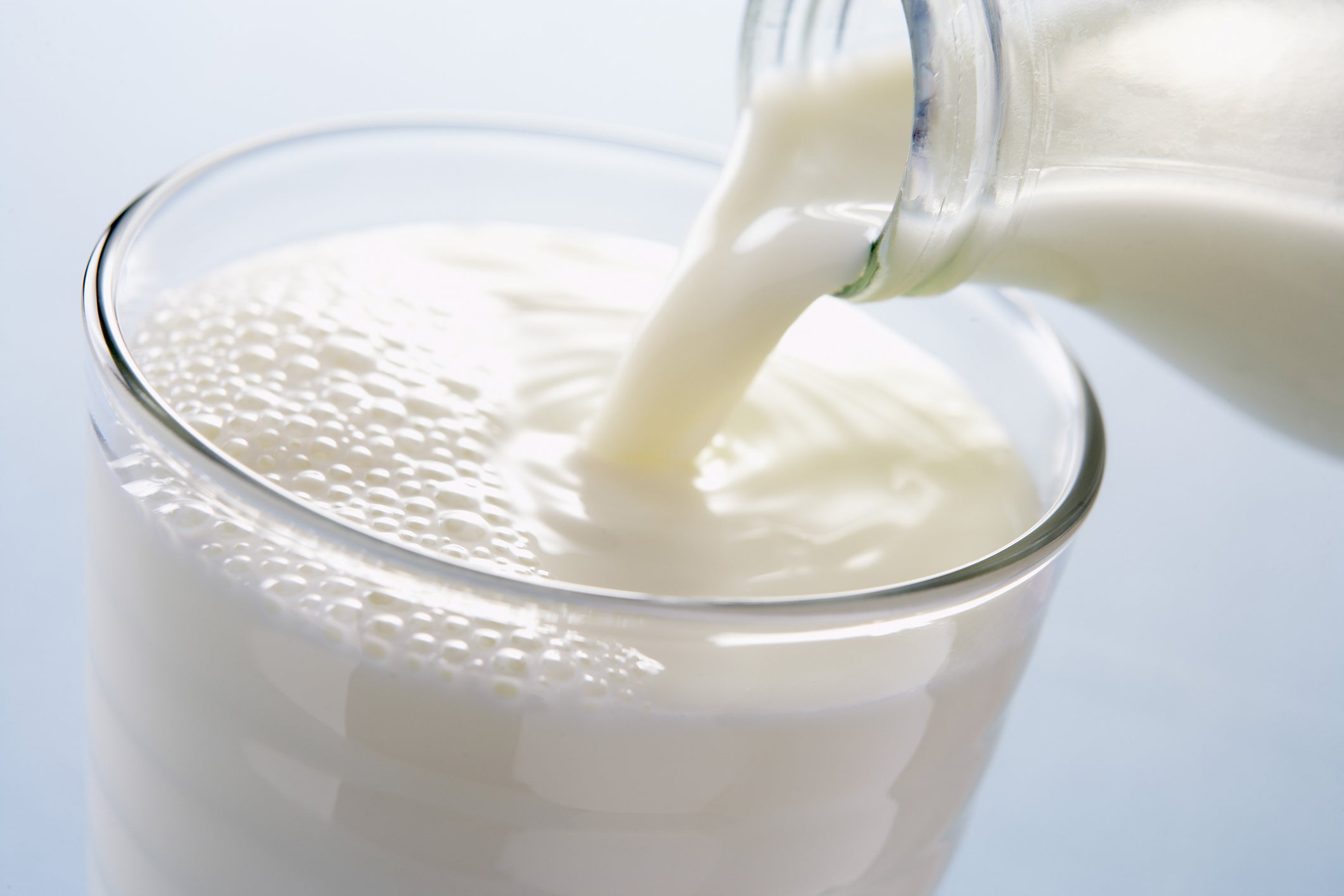 Sturnella Neglecta, approximately the size of a robin, the meadowlark sports a yellow breast with a black bib over its mottled brown body. These song birds are found from Wisconsin to Texas and westward to the Pacific. 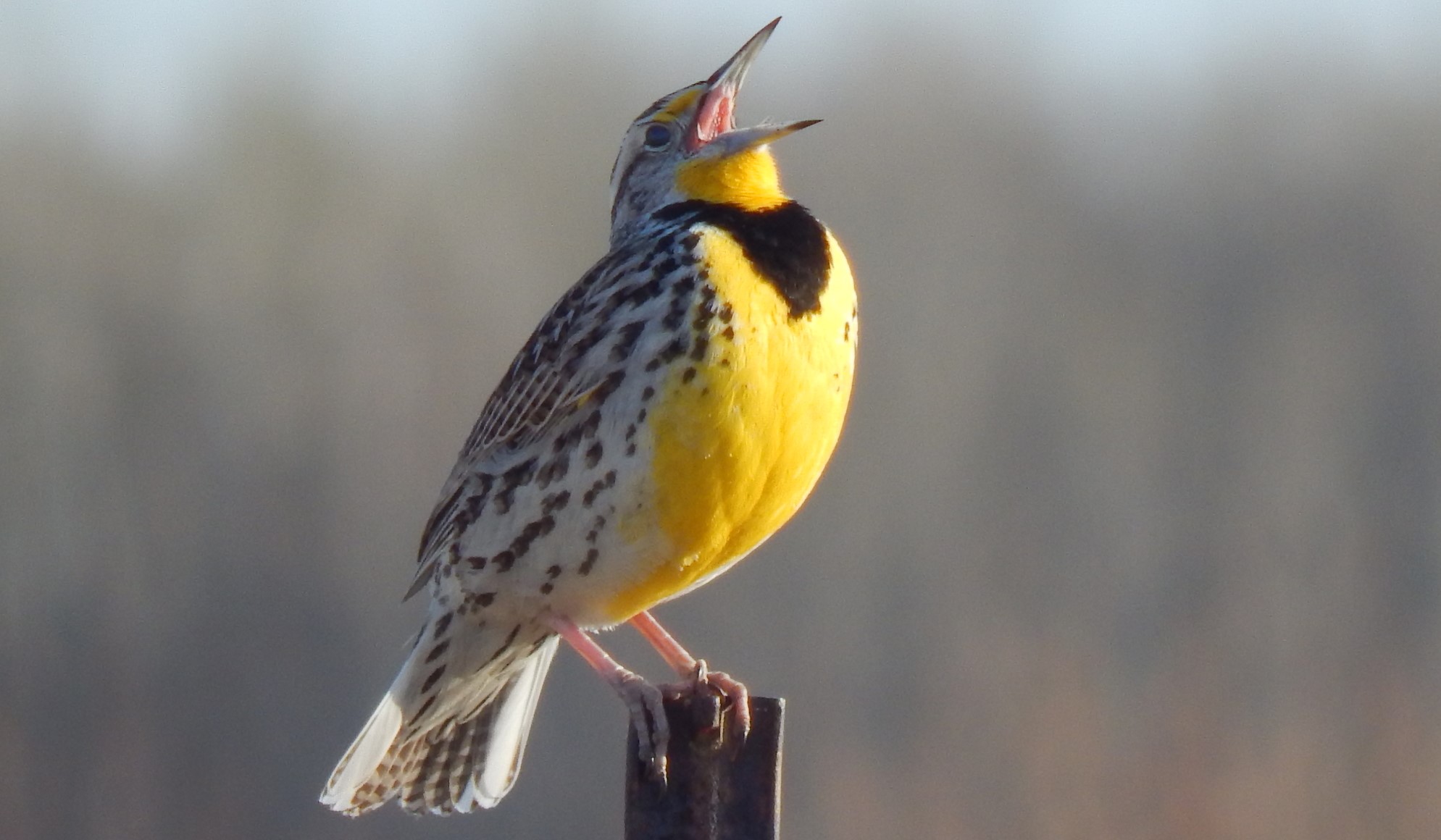 The present-day North Dakota capitol was completed in 1934 after a fire destroyed the original building. The capitol stands a towering 19 stories with a Moderne style architecture and Art Deco interior. Tours are available of the capitol building. For tour schedules and additional history visit the Capitol website. 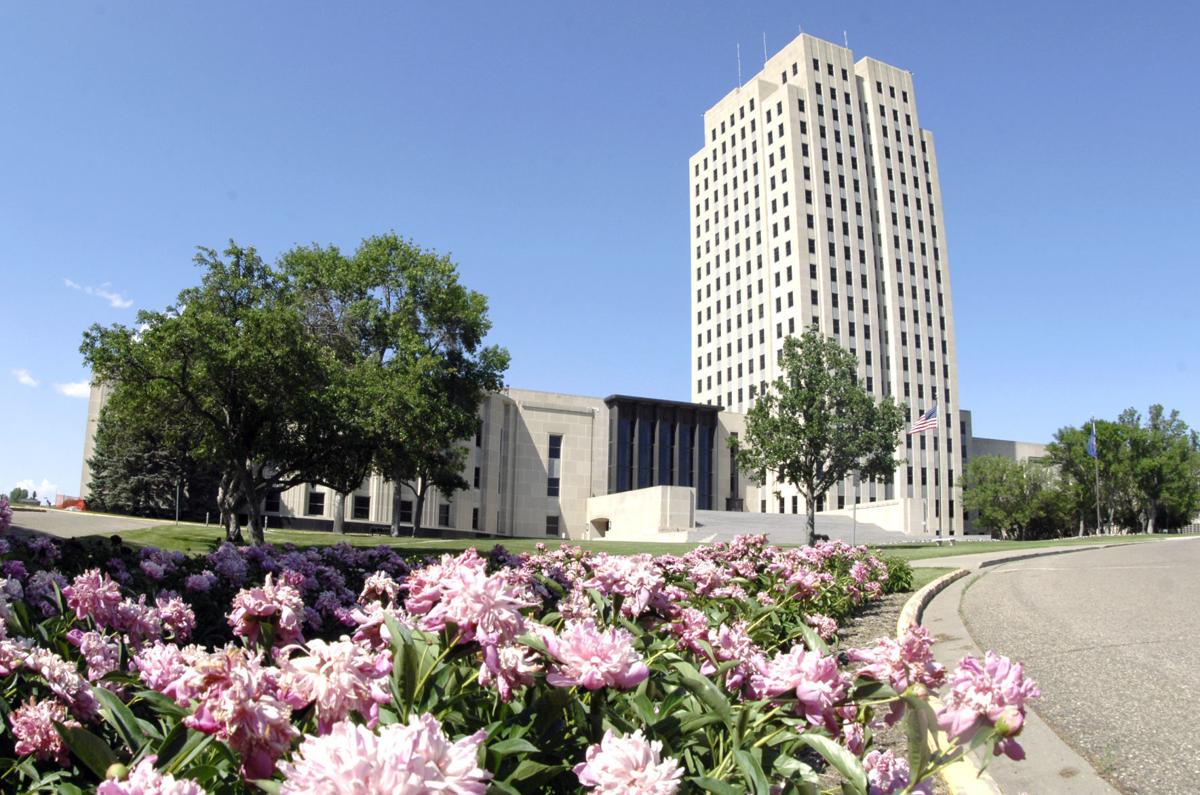 In 1957 the Legislative Assembly passed H.B. No. 822 sponsored by Representatives Clifford Lindberg and Gillman Olson to create the North Dakota coat of arms (1957 S.L., ch. 330). When the Governor is using the coat of arms as a flag there must be a white star placed in each of the four corners (North Dakota Century Code Section 54-41-04). The North Dakota coat of arms was displayed for the first time by the National Guard at Camp Grafton on June 16, 1957. Click here for more on the Coat of Arms. 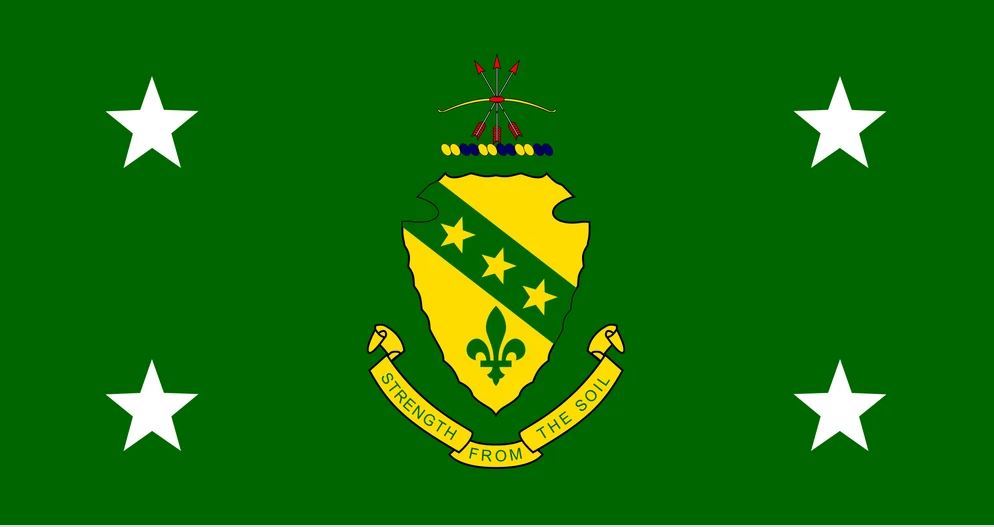 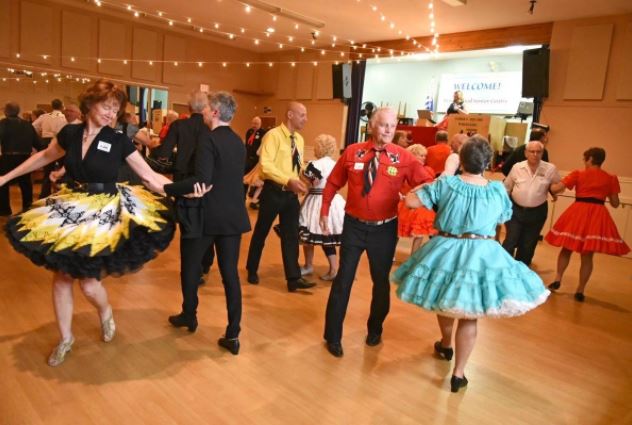 North Dakota waters have yielded mammoth size Northern Pike, resulting in a national sports fishing reputation for the state. (Named by resolution rather than bill, the measure does not appear in the North Dakota Century Code as codified law). 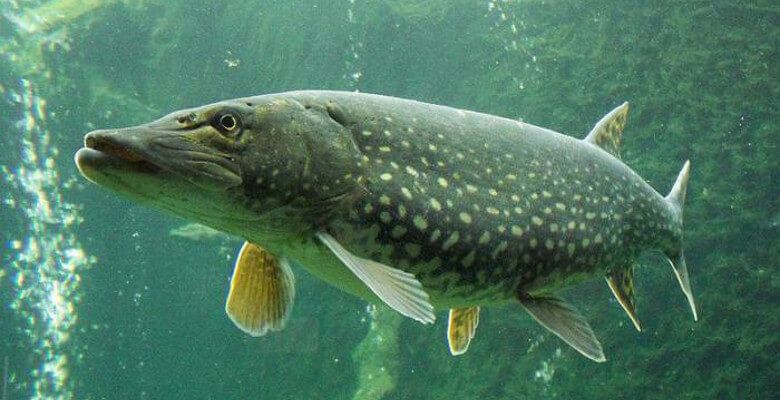 North Dakota's dark blue field displays a bald eagle holding an olive branch and a bundle of arrows in its claws. On January 21, 1911, Representative Colonel John H. Fraine introduced H.B. No. 152 designating an official flag for the state of North Dakota (1911 S.L., ch. 283). The legislation specifically required that the flag conform to the color, form, and size of the regimental flag carried by the North Dakota Infantry in the Spanish-American War in 1898 and Philippine Island Insurrection in 1899; the only exception was the name North Dakota placed on the scroll below the eagle. North Dakota Century Code Section 54-02-02 describes the state flag in detail. In 1951 S.B. No. 156 established the North Dakota State Flag Commission to consider changes to the flag (1951 S.L., ch.303). The commission concluded the flag "too closely resembled the coat of arms of the United States and that the flag was not symbolic of North Dakota." The commission's conclusions were widely challenged and its suggested changes rejected. S.B. No. 265 was introduced during the 1953 session and contained the recommendation of the flag commission. That legislation was defeated. Click here for more on the state flag. 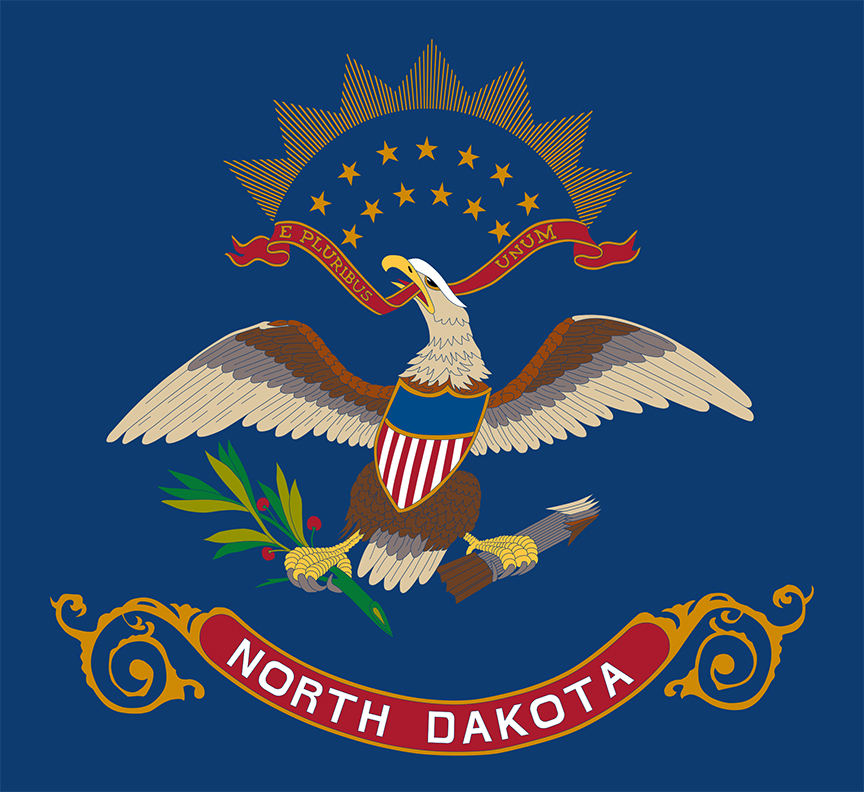 It has been identified as Rosa Pratincula in species. The flower sports five bright pink petals with a tight cluster of yellow stamens in the center. The Wild Prairie Rose grows along roadsides, in pastures and in native meadows. 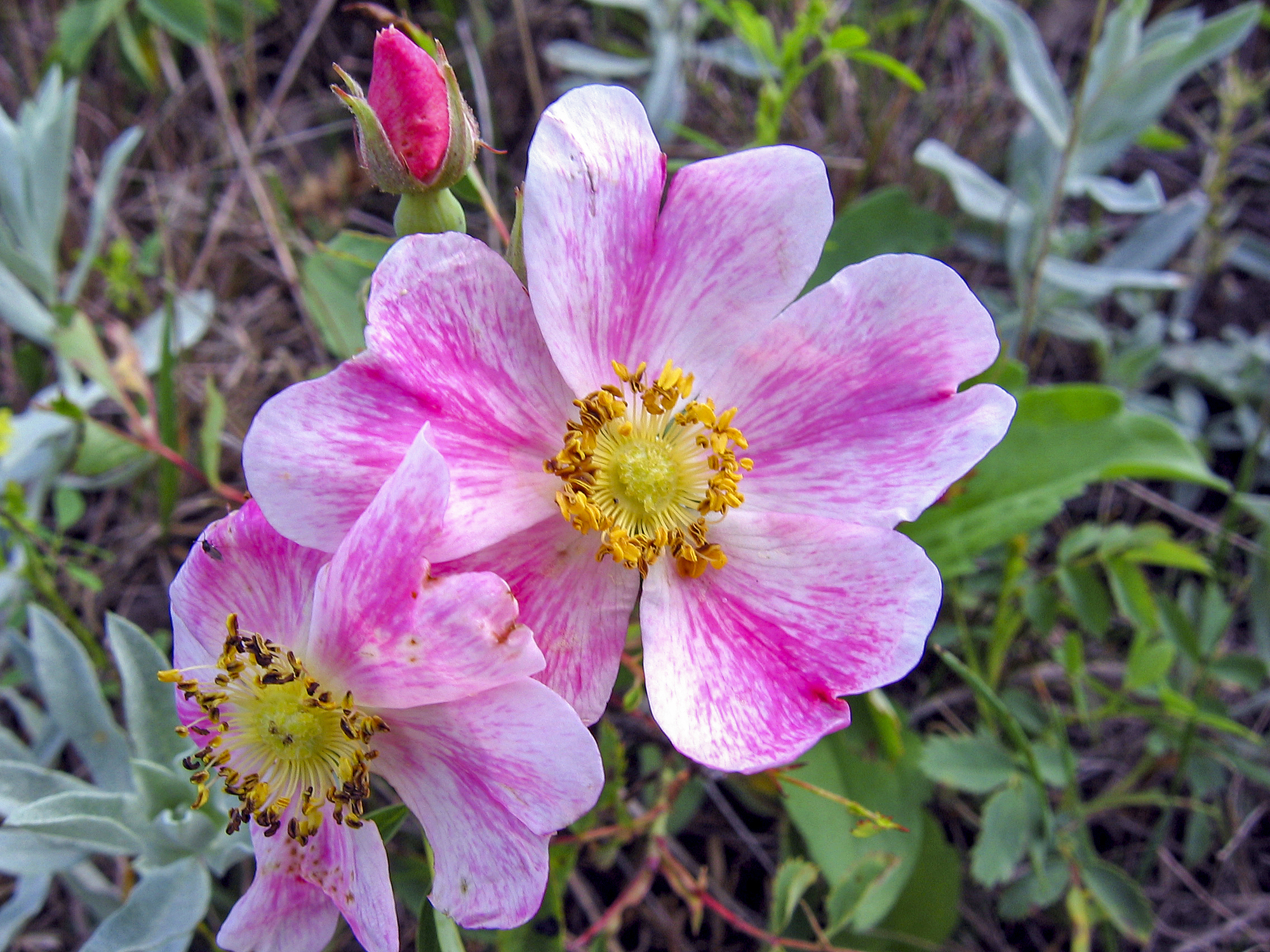 The Teredo was a worm-shaped mollusk related to clams, mussels, and oysters. It burrowed its way through sequoias and other trees growing near warm-water swamps in North Dakota 60 to 80 million years ago. As the trees in the mineral rich water petrified, some of the wood was replaced by silica and quartz, thereby preserving evidence of the Teredo. North Dakota was not represented in the Smithsonian Institution's mineral collection. Naming of the Teredo petrified wood as the state fossil remedied that situation and promoted the fossil to tourists, geologists, and rockhounds. 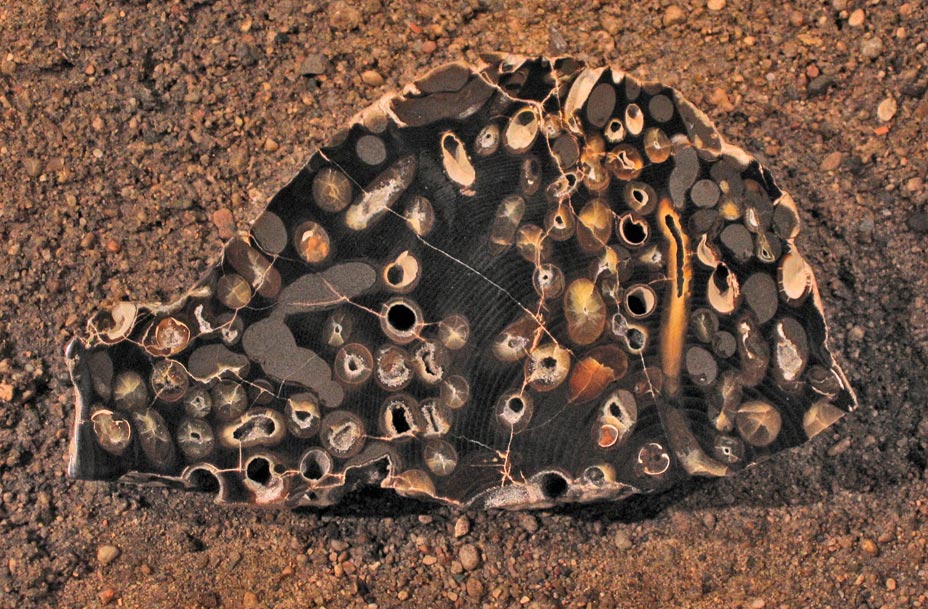 This member of the rose family is common across the state. 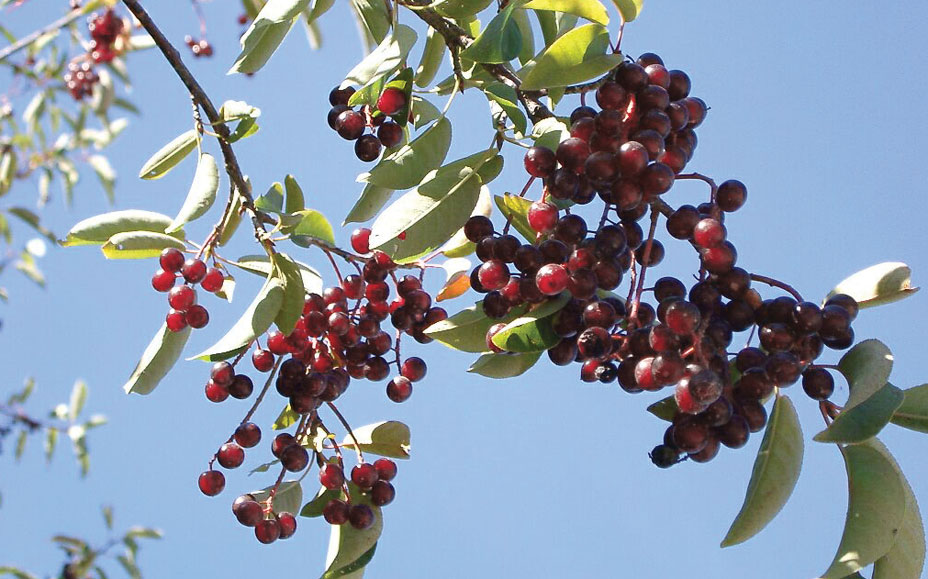 Agropyron smithii, tough native prairie grass, once covered nearly all of the state. The North Dakota Chapter of the Society for Range Management called for adopting an official state grass. Western Wheatgrass was selected for its adaptability to soil conditions, its performance record for hay and pasture, and its role in range management as a species found in all the state's counties. 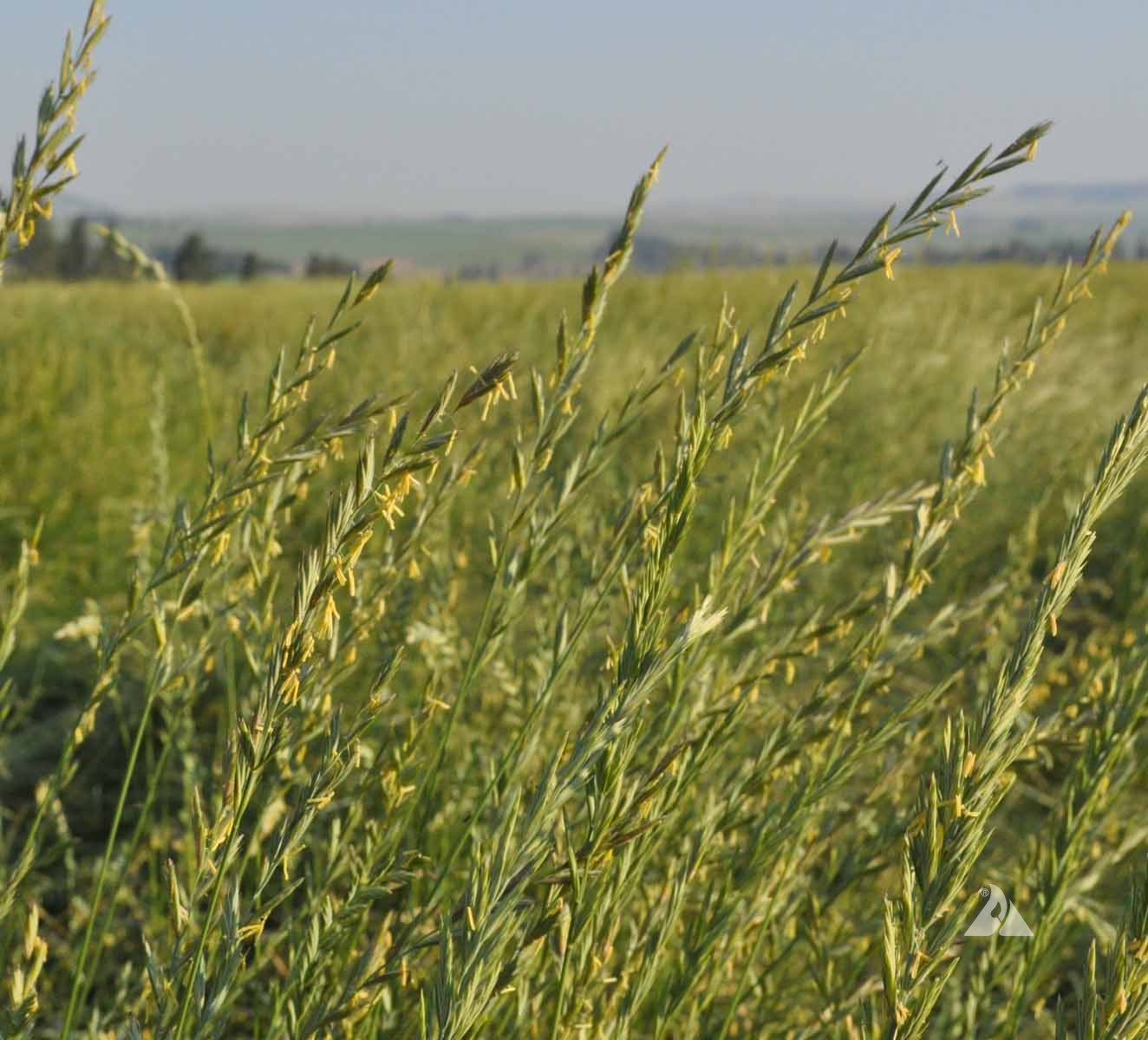 The description reads as follows: A tree, the American elm, in the open field, the trunk of which is surrounded by three bundles of wheat; on the right a plow, anvil and sledge; on the left, a bow crossed with three arrows, and an Indian on horseback pursuing a buffalo toward the setting sun; the foliage of the tree arched by a half circle of forty-two stars, surrounded by the motto "Liberty and Union Now and Forever, One and Inseparable"; the words "Great Seal" at the top; the words "State of North Dakota" at the bottom; "October 1st" on the left and "1889" on the right. 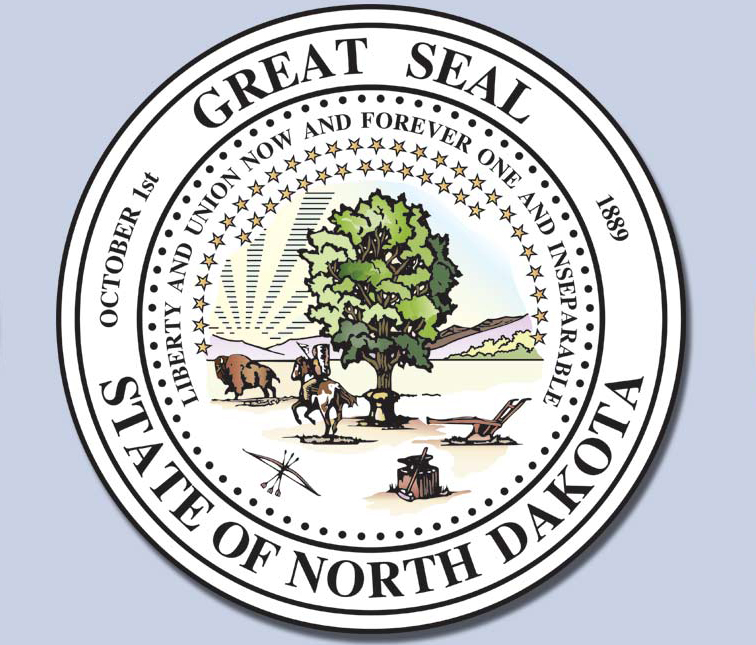 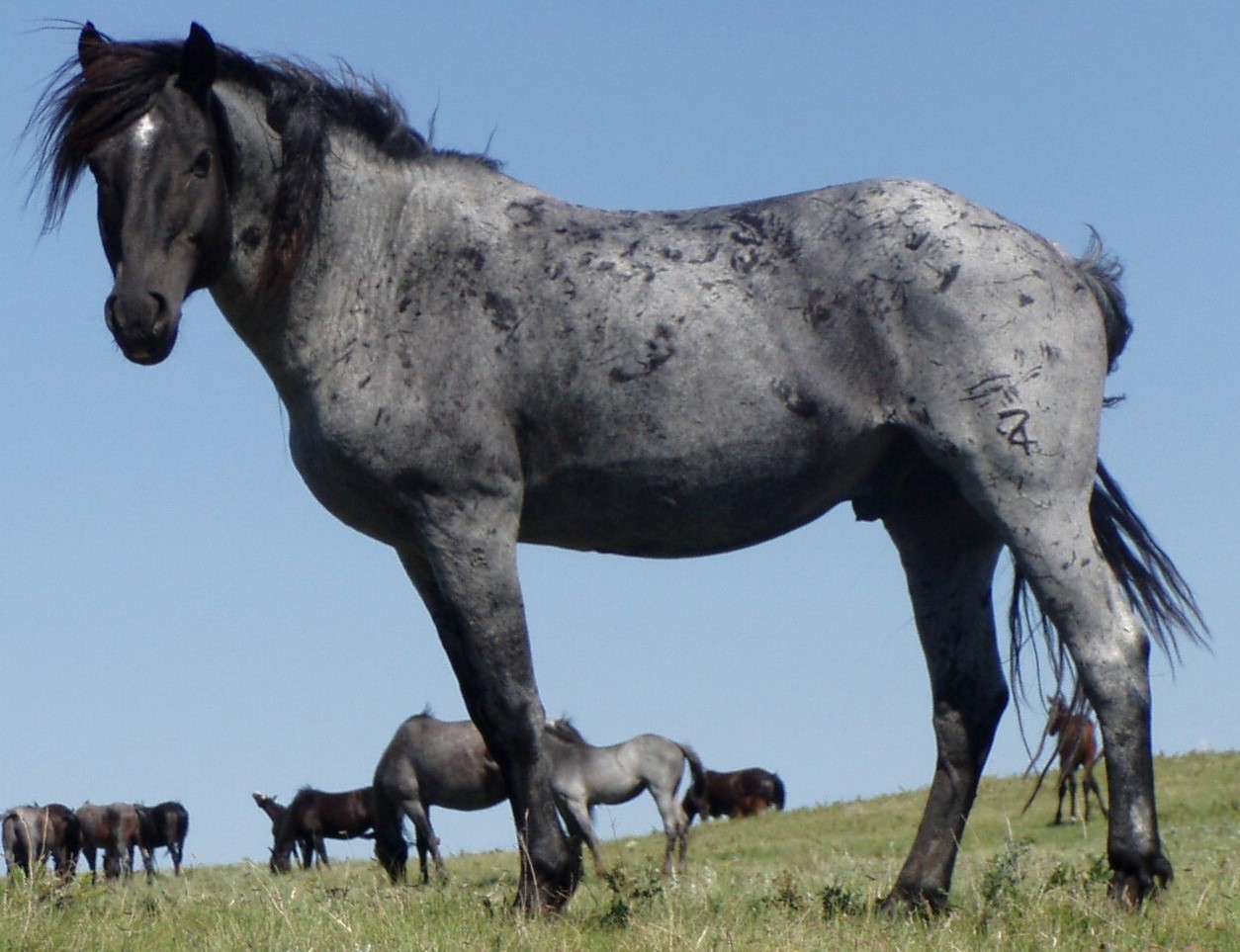 On March 15, 2011 Gov. Jack Dalrymple signed into law House Bill 1219, designating the Convergent Lady Beetle, commonly known as the ladybug, as the official state insect. He was joined at the ceremony by legislators and second-grade students from Kenmare Elementary School, who were instrumental in passing the legislation. The students learned that while 42 states had a state insect, North Dakota did not. In October 2009, the students contacted Rep. Glen Froseth, who supported them in their efforts to initiate the legislation. He signed on as the primary bill sponsor, along with Reps. Pat Hatlestad and Gary Kreidt and Sen. Karen Krebsbach.

North Dakota joined other states in a nationwide movement to make English the official language. Opposition came from organizations and persons fearing loss of foreign and native language or diminished access to diversity of other cultures. Supporters acknowledged the measure legalized what was already in practice. The designation made official the common bond that allows for communication and conduct of business.

In 1975 the Legislative Assembly passed H.B. No. 1160, which designated James D. Ployhar's Spirit of the Land as the official state march (1975 S.L., ch. 462). Mr. Ployhar had been commissioned by the North Dakota Band Directors Association to compose a march appropriate for official state functions. Spirit of the Land was played in the Capitol's Great Hall by the Jamestown High School Band on the day the bill passed the House of Representatives in February 1975. Once designated as the state march, Spirit of the Land was sent to a publisher. The title happened to be nearly identical to another march. As a result, the publisher requested that a new title be selected. Mr. Ployhar agreed to Flickertail March. In 1989 the Legislative Assembly approved the change.

Motto: "Liberty and Union Now and Forever, One and Inseparable"

Quoted from Daniel Webster's Reply to Hayne. This language was suggested by Dr. Joseph Ward of Yankton, South Dakota, who was quoting from Daniel Webster's Reply to Hayne. However, the motto used for the Territory had two of the phrases reversed; when North Dakota became a state that error was corrected. (North Dakota Constitution Article XI, Section 2)

"One sows for the benefit of another age" is the English translation.

Flickertail State: Flickertail refers to the Richardson ground squirrels which are abundant in North Dakota. The animal flicks or jerks its tail in a characteristic manner while running or just before entering its burrow. In 1953 the Legislative Assembly defeated Senate Bill (S.B.) No. 134 that would have adopted the Flickertail facsimile as the official emblem of the state.

Roughrider State: This name originated in a state-supported tourism promotion of the 1960s and 70s. It refers to the First U.S. Volunteer Cavalry which Theodore Roosevelt organized to fight in the Spanish-American War. In fact, the "Roughriders," which included several North Dakota cowboys, fought dismounted in Cuba due to logistical problems. In both 1971 (House Bill No. {H.B. No.} 1383) and 1973 (G.B. No. 1443) the Legislative Assembly defeated bills intended to change the words Peace Garden State on state license plates to Roughrider Country. 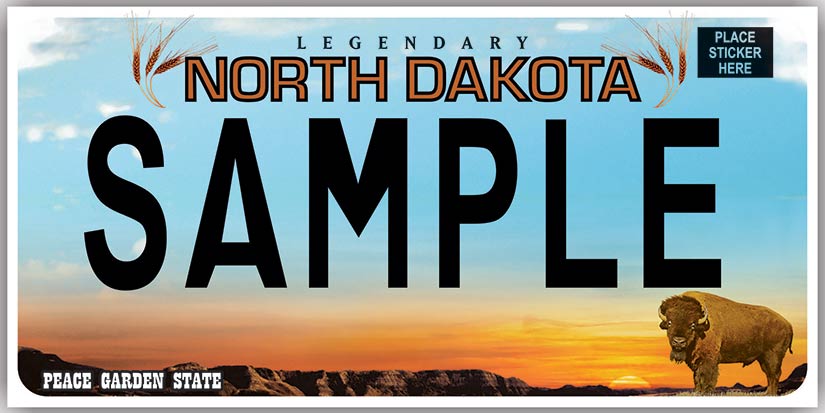 Origin of the Name: Territory created in 1861

On March 2, 1861, President James Buchanan signed the bill creating the Dakota Territory, which originally included the area covered today by both Dakotas as well as Montana and Wyoming. The name was taken from that of the Dakota or Sioux Indian Tribe. Beginning about 1877, efforts were made to bring Dakota into the Union as both a single state and as two states. The latter was successful and on November 2, 1889, both North and South Dakota were admitted. Since President Benjamin Harrison went to great lengths to obscure the order in which the statehood proclamations were signed, the exact order in which the two states entered is unknown. However, because of alphabetical position, North Dakota is often considered the 39th state.
Dakota is the Sioux Indian word for "friend." 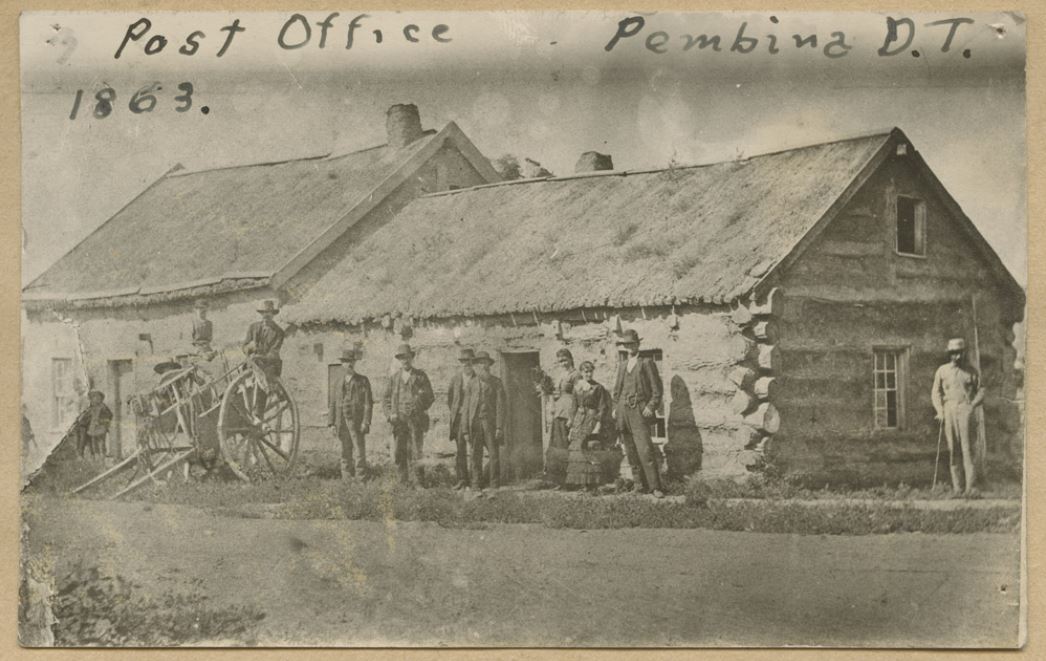 The face of the North Dakota Quarter has the inscriptions "United States of America," "Liberty," "In GOD We Trust" and "Quarter Dollar." One side of the coin was designed by John Flanagan. William Cousins made modifications to the John Flanagan original design. The reverse of the North Dakota Quarter features American Bison and a sunset over the Badlands. The reverse was designed by Stephen Clark with Donna Weaver working as sculptor/engraver. 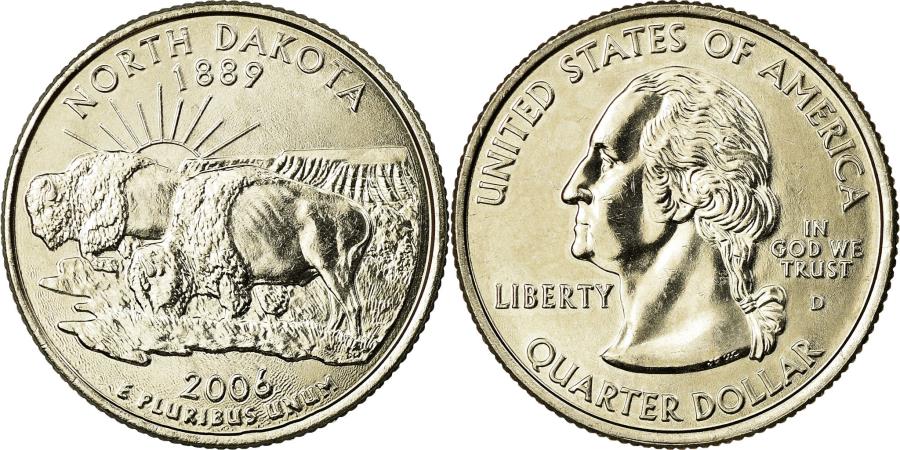 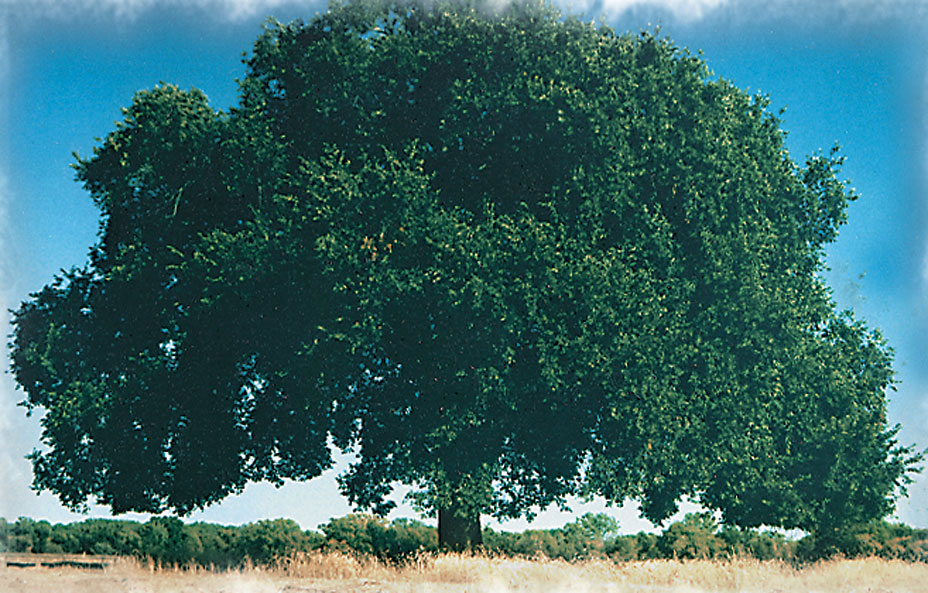 World of Wheels in North Dakota