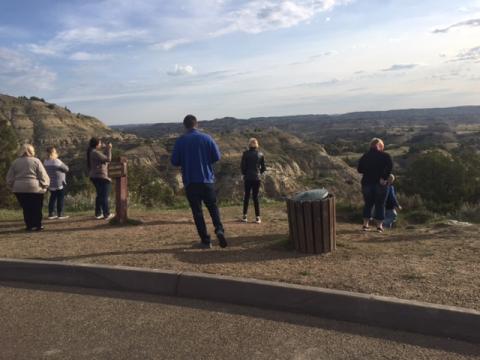 Have you ever stopped in on a road a few feet away from a large buffalo - OK bison, but we like to call them buffalo - and swore he was bobbing his head to Gordon Lightfoot music. It happened to me on a recent FAM tour. I swear.

Rolling through the North Unit of Theodore Roosevelt in a sweltering van and no air conditioning, you have to improvise, so you pop the side doors whenever possible to get some air and take a few photos. Through the miracle of bluetooth and an Ipod (I think that's what it was), the North Unit was visited by Mick Jagger, Stevie Nicks, David Bowie and many other artists. 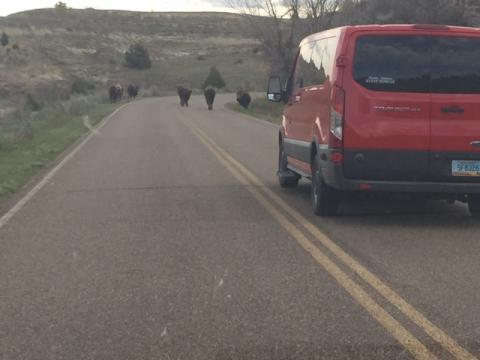 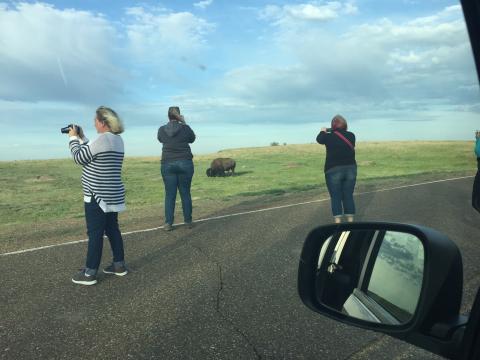 At one point, we came upon a big bull and stopped to say hello and let him enjoy some tunes. My English and Australian passengers visiting North Dakota on an international FAM tour were impressed. Then the big boy started bobbing his head to Carefree Highway. I swear he was in tune with Gordon Lightfoot. We drove on, and as we did, I know I heard him snorting Wreck of the Edmund Fitzgerald.

It was only a small part of a day that started at 6:30 a.m. in Medora and ended 10:30 p.m. in Watford City. It included a trip around the South Unit loop, Wind Canyon, the Chateau de Mores, Burning Hills Amphitheatre, the Cowboy Hall of Fame, a wagon train ride that was more like the Medora to Deadwood Stage trying to set a land speed record, the North Unit and the unbelievable Rough Rider Center and a night cap tour of the brewery Stonehome in Watford City.

That's a lot packed into a day and more details to give international tour operators to take home.