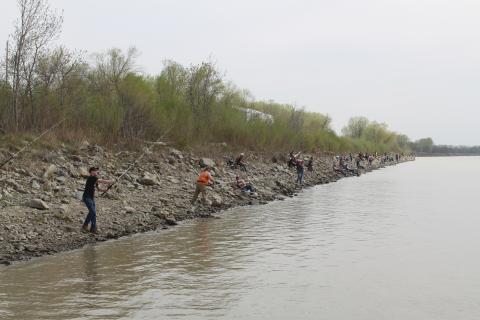 I had the opportunity last May to try my hand at paddlefishing near the confluence of the Yellowstone and Missouri rivers near Williston, North Dakota. This had been one of my personal bucket list activities, not only because of the possibility of catching a hundred-plus-pound fish, but also to investigate what I have heard about a festival-like atmosphere near the confluence during the season. I had heard stories about people camping out and standing shoulder to shoulder using huge rods with giant treble hooks to snag giant fish. I had to check this out. 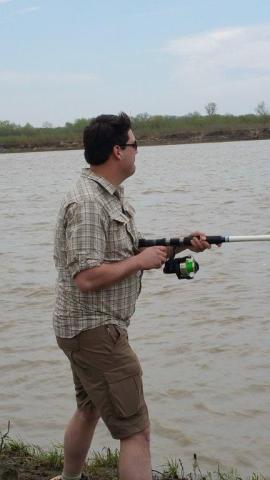 Paddlefish are an ancient fish most closely related to Sturgeon. They are primarily filter-feeders mostly eating tiny zooplankton. The distinct rostrum, or paddle on the head of the fish, acts a sort of antenna that directs the fish toward weak electrical fields that plankton emit.

Because paddlefish don’t take bait, the method of taking is by snagging. The gear is quite simple: a big game spinning rod with 30-plus pound test line, a weight about five ounces tied to the end of the line and a 10/0 or 12/0 treble hook a foot or so above that loop. No bait needed, no debate live bait vs. plastics, what color jig or crank, just the hope that a big fish will swim by and the hook will do the rest.

Arriving at the confluence area with my host, Amy from the Williston CVB, I noted how much this indeed looked like a concert festival or sporting tailgate party. People out with grills and coolers, set up in all sorts of tents, campers and some (like me) driving in from a comfy hotel stay. Walking down to the water, people near the boat launch weren’t shoulder to shoulder, they were however dotted along the shore line every 20 feet or so, as close as possible casting with a 10-foot rod.  We chose to take advantage of the free shuttle boat to go across the river where it was less crowded. The friendly boat shuttle driver gave us his cell number saying he’d come back periodically to check on us or simply call for pick up.

We found a spot along the Upper Missouri next to some guys from Nebraska having a great time. They would cast a couple dozen times, sit down and drink a cold beverage, then cast another dozen times, then sit and enjoy another cold beverage, then repeat again and again. The joy of paddlefishing was immediately evident, every person had great stories about past paddlefish adventures and epic fish battles. I grew up fishing exclusively from the shore, I was happy to stand on the edge of the water and proceed with the cast and retrieve cycle. I was serious about landing a fish. I did not have the relaxed pace and carefree demeanor of our Nebraskan neighbors. I set about trying to cast again and again at a pace and frequency that would guarantee a fish. I’m glad Amy brought some pretzels and beef jerky to get me to take a break every once in a while. 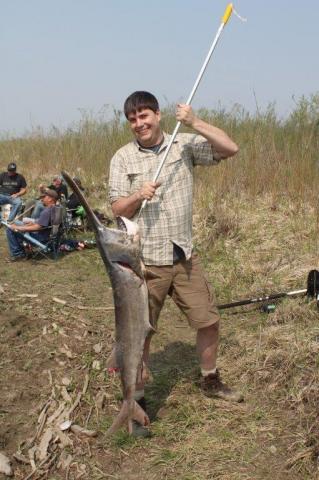 We had fished an entire afternoon with no results, a single lost hook and ensuing adventure trying to figure out how to retie the rig from a YouTube video on our cellphones. It was getting late in the afternoon and I was ready to call it a day, I decided to move and cast from and area just about where we had been at all day. My arms were wore out from a day of casting when it hit, I thought I had again found the log that claimed my hook earlier in the day, Not so as this started to run and the reel started to whine as yards of line unspooled. I had to dig deep. My arms were done before I hooked the fish, adrenaline kicked in and I began the battle letting the fish run then reeling it back in then, letting it run and bringing it back. One of us was going to give up from exhaustion. It felt like an hour but I probably fought for 10 minutes, waiting for the fish to emerge from the water was painful, is it 120 pounds? 30 pounds? Seeing it I knew it was the largest fish I’ had ever caught and not knowing anything about paddlefish weight I guessed it had to be 60 pounds. On the steep edges of the Missouri I was glad we had a gaff hook to retrieve the fish. Success! I had landed a Missouri River paddlefish. I immediately and proudly placed my tag on its dorsal fin. It was a smaller male fish but at 40 pounds it was, nonetheless, the largest fish I had ever caught and I was told perfectly hooked in the tail, giving me the best fight this fish could muster.

We called the shuttle boat to get us back to the boat ramp area to get the fish processed. In a clever arrangement, the North Star Caviar Company will cut and process the fish, giving anglers the fillets while they collect the roe for commercial caviar.

Want to try paddlefishing? First thing you need is a tag. They are available from vendors in the confluence area and North Dakota Game and Fish. The gear can be bought anywhere. Scenic Sports in Williston are experts on the sport and can help completely outfit your adventure. Then you have to figure out when to go. Paddlefishing season opens May 1 and runs through that month. Earlier in May is better, as once the 1000-fish harvest limit is reached, there is an “in-season closure” and the season ends. We fished on the May 7 last year and the season closed right after that. Snagging may only be done from 8 a.m.-9 p.m. There are harvest-only days: Tuesday, Wednesday, Friday and Saturday where snagged fish must be immediately tagged with your own tag. Snaggers with a valid tag may participate on snag-and-release only days: Sunday, Monday and Thursday.