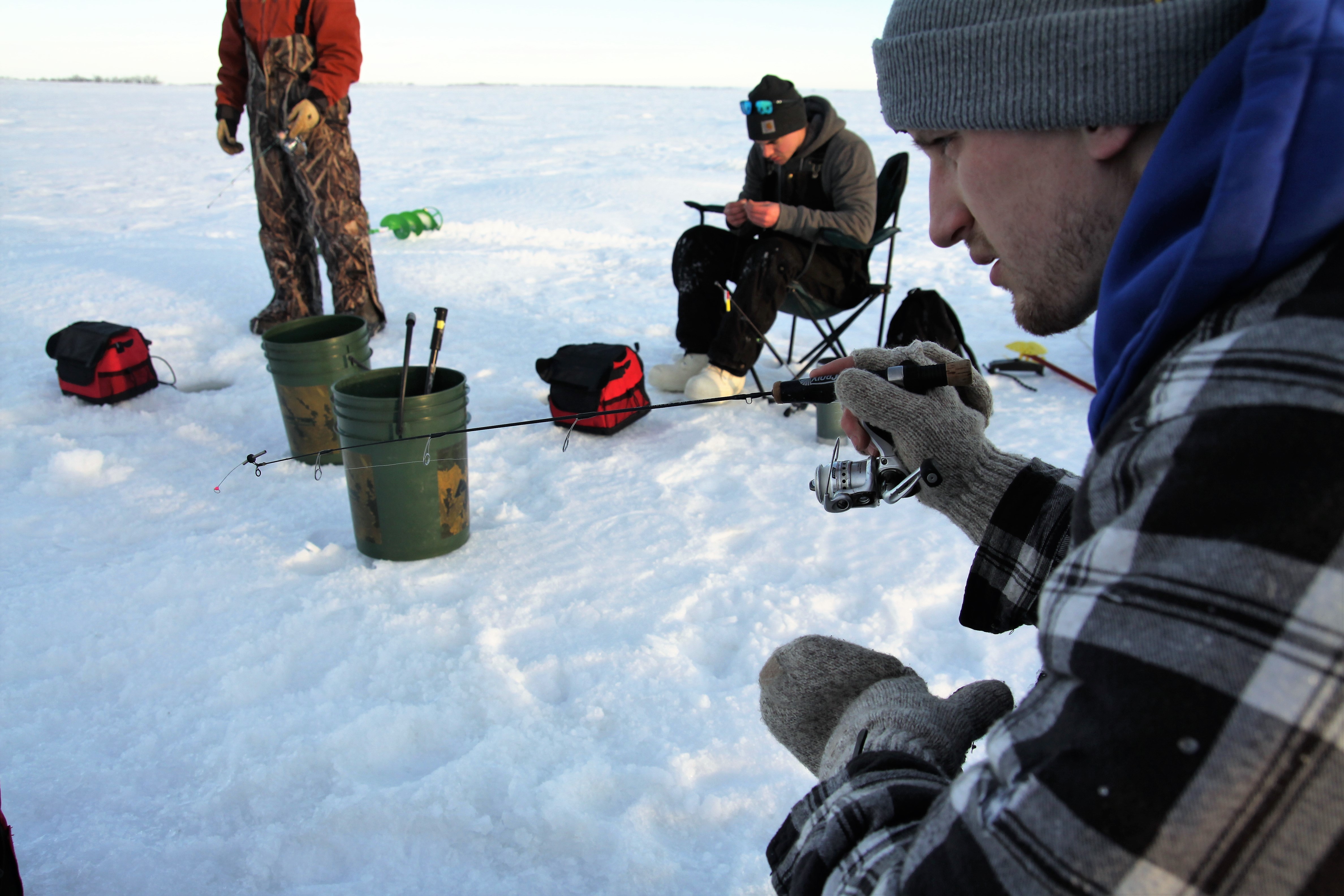 The middle of nowhere isn’t exactly a place that makes it to a lot of bucket lists. But it did make it on my to-do list this past weekend in the name of some good fishing.

To be more specific, my “middle of nowhere” destination was Lake Sibley. It’s about 9 miles of dirt roads and open fields north of Dawson, a small town of less than 100 people. The closest things to trees are telephone poles. Any structures you pass look like they have been abandoned for decades with the exception of a family farm or two.  And once you get there, the lake resembles the closest thing to a snow-covered desert as you can imagine.

So why were we putting so much effort to get to nowhere? Well, as I've learned after a few trips, North Dakota has a funny way of proving even if you’re out in the middle of nowhere, it definitely doesn’t mean you’re in the presence of nothing.

We had made it just in time to see the sun come up as we drilled into the ice. With that clean tree-less horizon we were able to turn our heads left and see a full moon set and turn our heads right to see the first glimpse of the sun.

It reminded me of something my Grandpa always said about North Dakota: “You guys have an awfully big sky around here.”  I finally appreciated a statement like that with a sight like this.

But onto the more important matter of the day: PERCH. And we didn’t have to wait long. Hardly even a few minutes. Soon our Vexilars, tools that are designed to track fish underneath the ice, glowed a bright red as massive schools looked for breakfast. The rest of the morning continued like that. Fish would come in spurts. We would add six to the bucket in 15 minutes and then sit for an hour just enjoying company. Even a few walleye made an appearance. 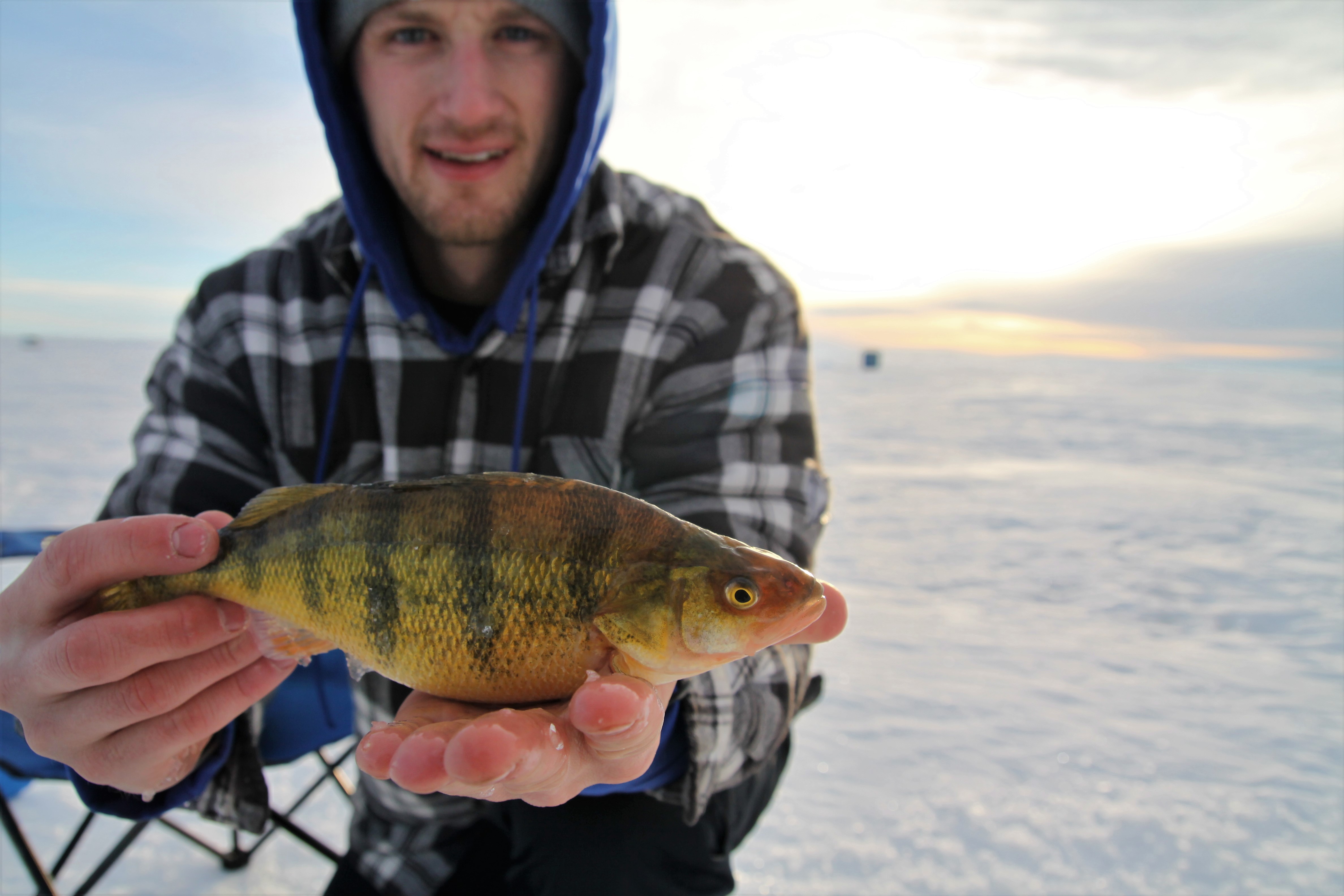 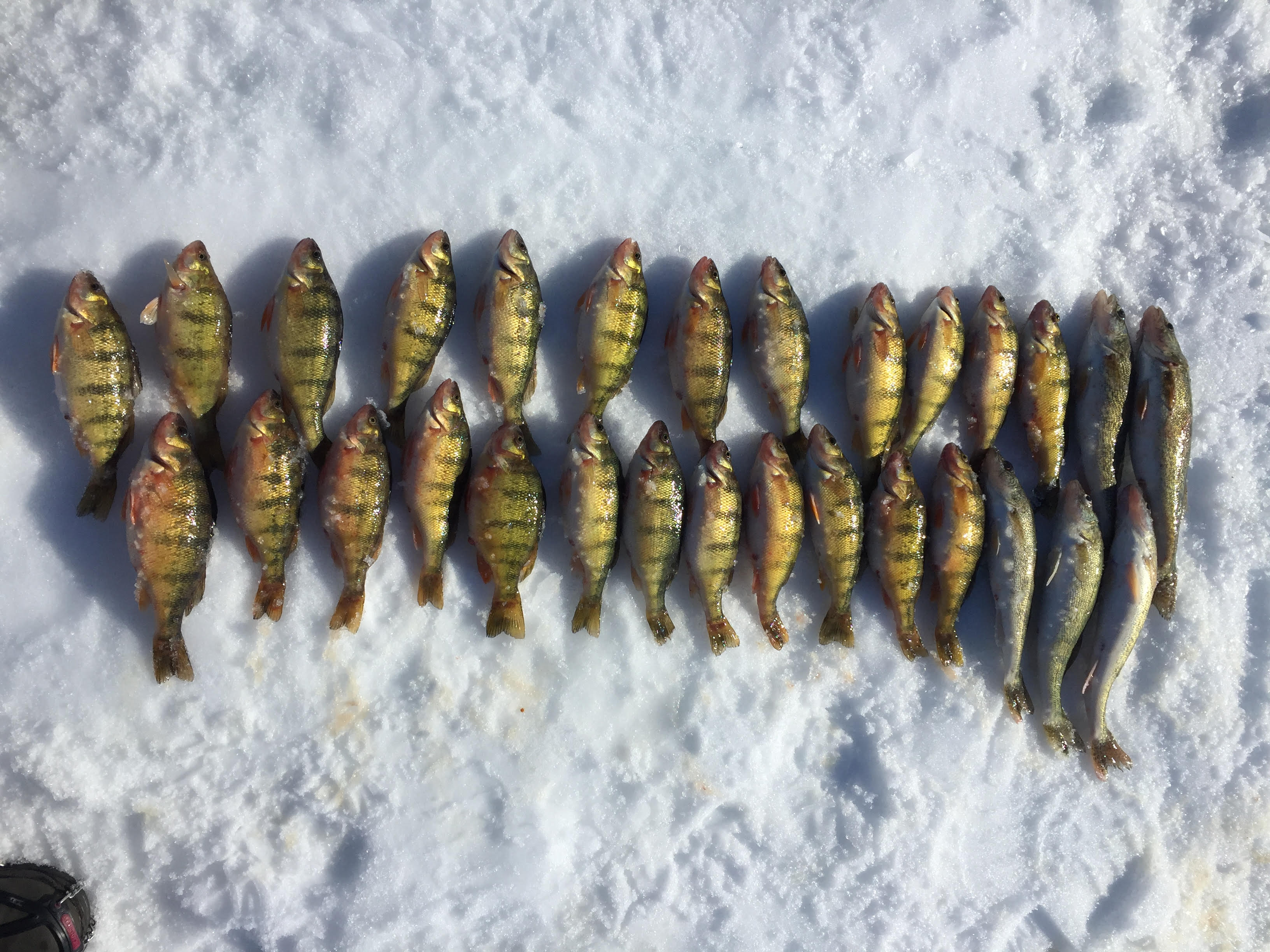 The always-present North Dakota wind eventually prompted me off the ice and back to the cabin as the more dedicated fishermen stayed behind. Again, an empty cabin without WiFi or cable would prove to be a boring evening to most, but we had one thing that most people won’t see in their lifetime … 20-foot-tall snowdrifts. For once I was grateful for the brutal blizzards that started off our winter season.

These drifts made for great games of king of the hill, snowball fights, even slides. It was third grade recess all over again. 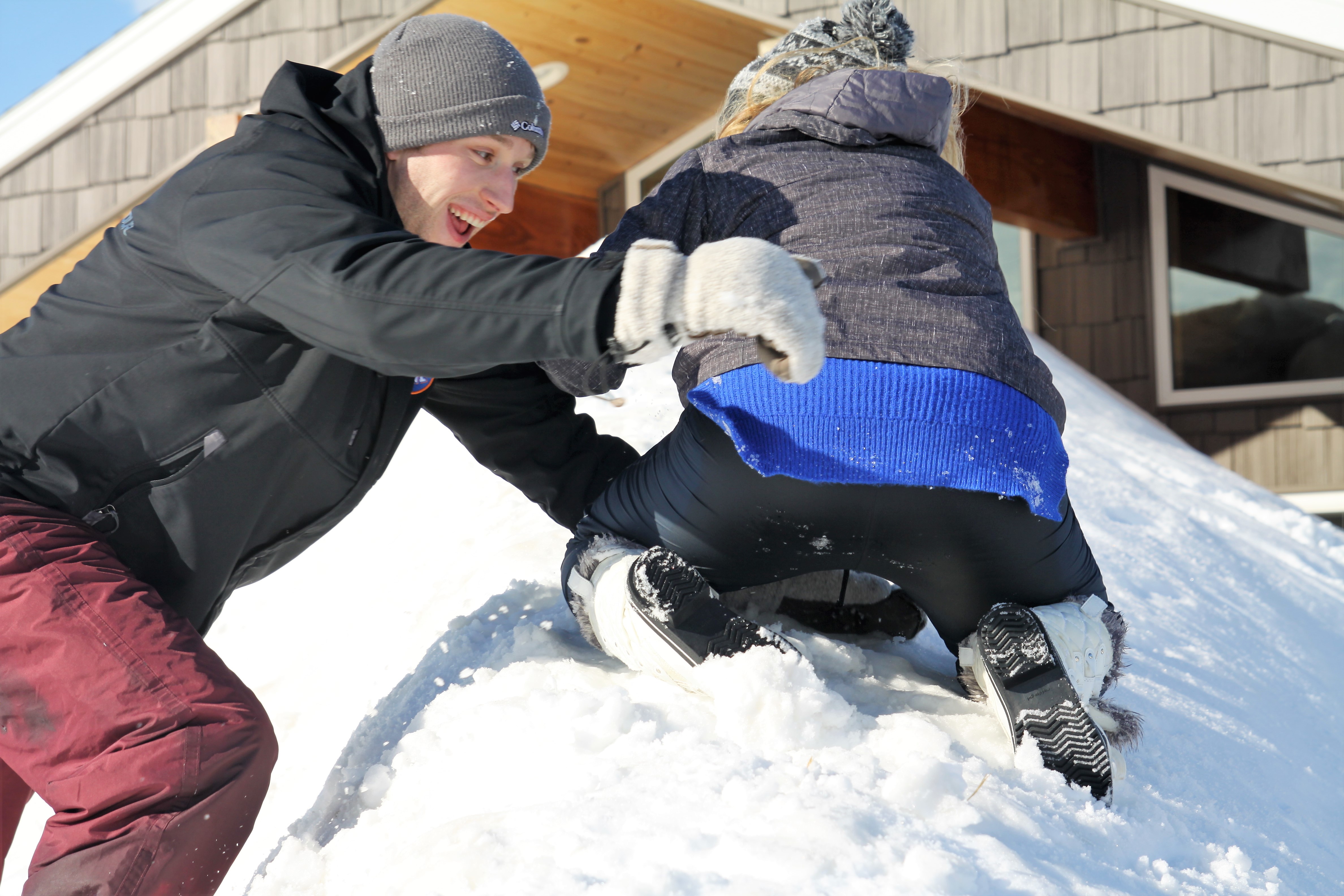 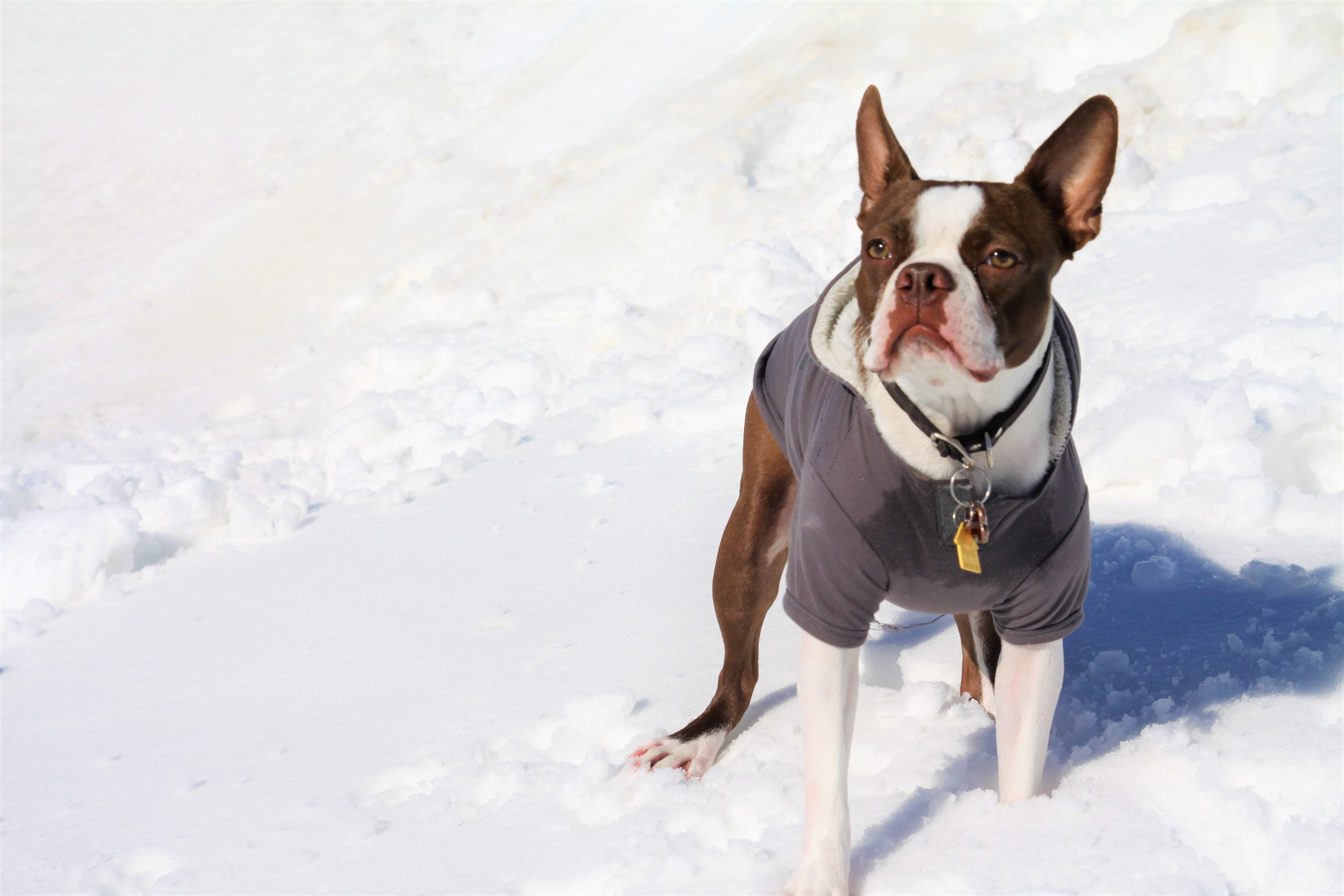 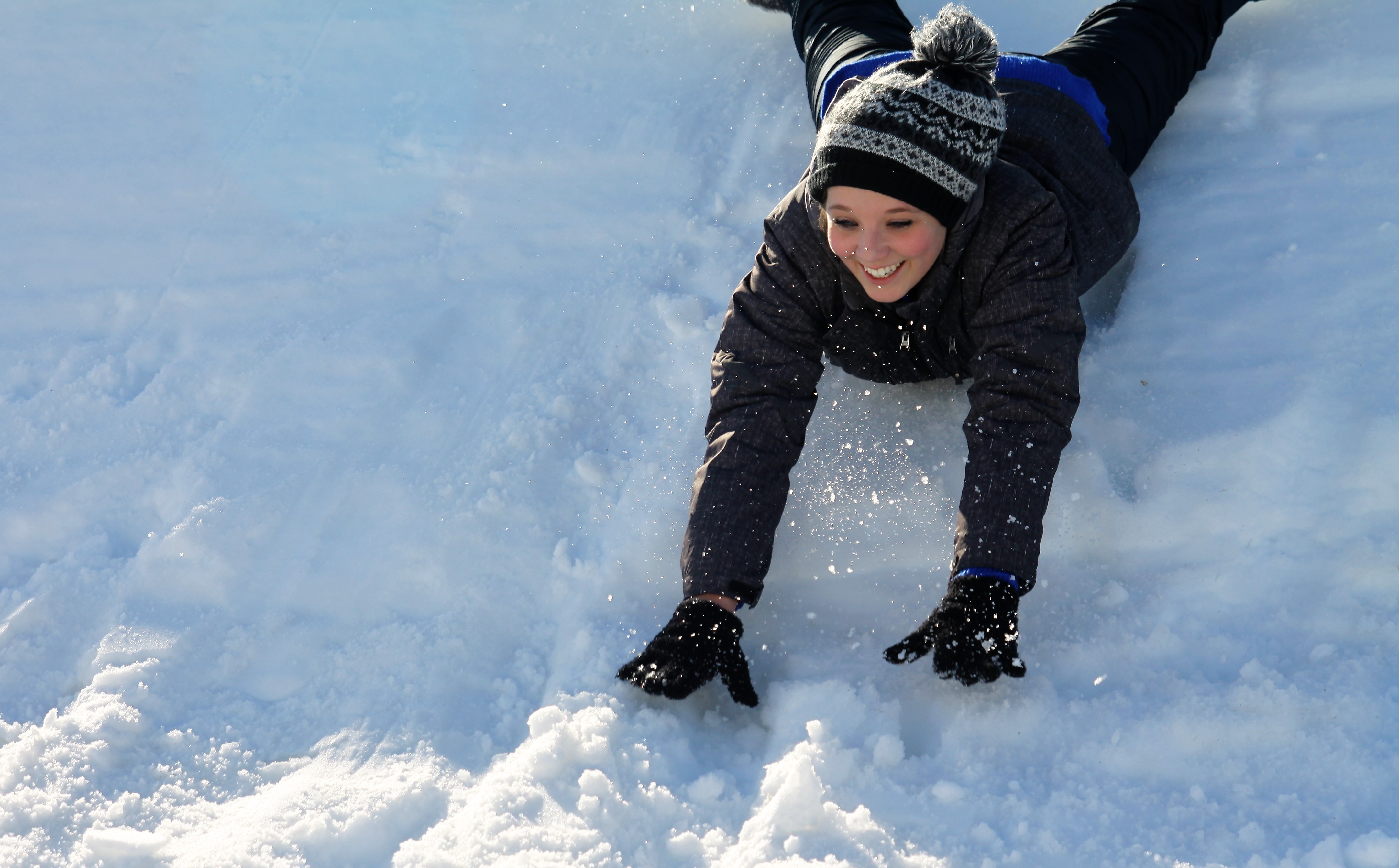 We took a trip back into Dawson for a burger and brew, played eye-spy on their highly decorated walls and then spent the next 7 hours of our night (yes seven hours) playing card games in the cabin.

After a coffee overlooking the lake, our group was in love with how the weekend was spent. It might not have been the typical weekend getaway, but it was one to remember. 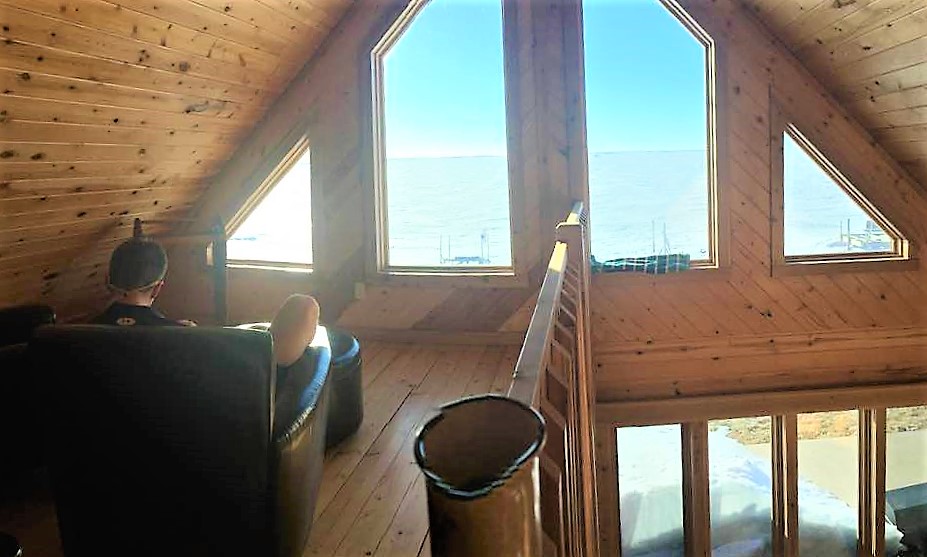 I wasn’t able to link back to any businesses in this article. You might not have even heard of any of the few places I’ve mentioned, but that’s kind of the beauty of it. It feels special in how un-special it appears. So next time you're looking for a weekend getaway, make time time for the middle of nowhere. I never thought I'd have so much to say about so little.