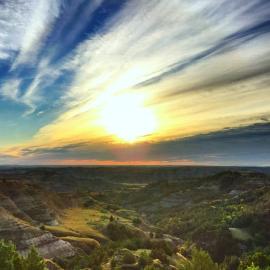 North Dakota's Theodore Roosevelt National Park has a rare distinction among all national parks in the United States in that it was the only one to first be named a memorial park. Make time this year to see what all the fuss was about by visiting multiple units of the park: the North Unit near Watford City, the South Unit at Medora and Roosevelt's Elkhorn Ranch site in the Badlands in between. And why stop there? Make it a point to visit affiliated sites Fort Union Trading Post, Knife River Indian Villages and the International Peace Garden. 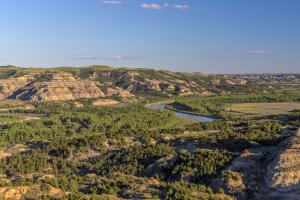 National park named in honor of the 26th President of the United States, the ruggedly beautiful and serene park's three units are filled with recreational opportunities, as well as bountiful wildlife. Scenic routes lead through the North and South units.

Fort Union near present-day Williston was the principal fur trading post on the upper Missouri River in the early 1800s. Native Americans living in the area and trappers co-existed peacefully for many years when the fort was first established. 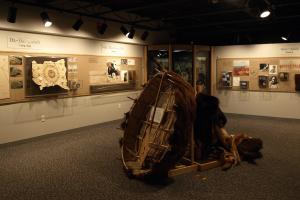 Knife River Indian Villages National Historic Site was said to have a population rivaling St. Louis when Lewis and Clark came through in 1804. Today, the former home of Sakakawea has a modern museum, earthlodge depressions, a reconstructed earthlodge and walking trails. 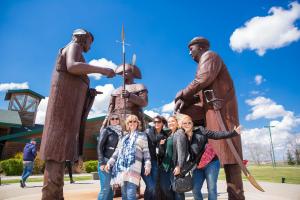 The Lewis and Clark Trail in North Dakota follows the Missouri River from South Dakota through North Dakota to Montana. It is the route the explorers took to and from the Pacific Ocean. Attractions and hiking areas dedicated to the expedition can be found along the route. 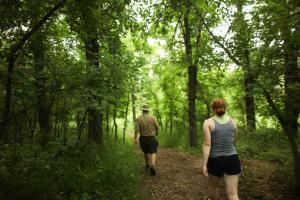 The North Country National Scenic Trail runs from Lake Sakakawea State Park, through the Sheyenne National Grasslands and exits the state near Wahpeton on its way to New York. Sweeping views are the norm in North Dakota, as the trail through the northern Great Plains serves up big skies, superb birding and breathtaking sunsets. 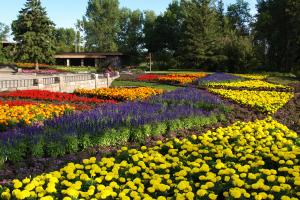 The 2,300-acre International Peace Garden straddles the border between the United States and Canada. It features spectacular floral displays, lakes and wildlife and represents the peace between the two nations.