How one sibling rivalry brought a national television show to their front steps.

Many can relate to a little friendly competition between family. Maybe a card game over the holidays or debating who makes the better Christmas cookies, mom or grandma? Now step into the shoes, or should we say cargo boots, of a military family and the kind-hearted “trash talk” takes a whole new meaning.

“It was sneaking out in the middle of the night so now one would know what you were doing,” Greg Wilz recalls. 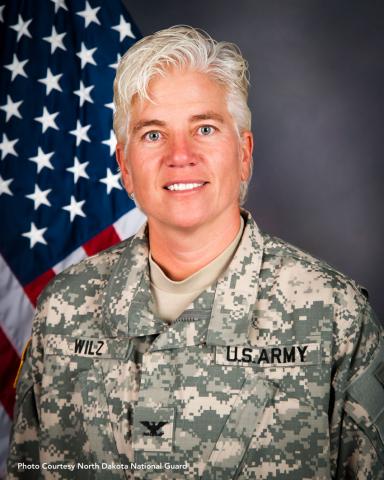 Greg Wilz says it was his sister, Gigi, who first said she was going to decorate her house special for Christmas. The holidays were just as big of a family tradition as the competitive spirits between each other; spirits that started when they were little and followed them into their careers, Greg a retired Colonel and Gigi a General. Now add in Davina French, a Lt. Col. who lives with Gigi, and you have a trifecta of people who are used to giving 110% in everything they do.

That is how Lights on Chestnut was born.

“Greg’s side is very playful, figurines throwing snowballs at each other. My side is very starish. I like my lines,” Davina says.

Lights on Chestnut is a “dueling” Christmas lights show between Gigi and Davina and Greg and his wife, Sharon. The two houses sit across from each other and the lights are synchronized to their own radio channel that you tune in to from your car. There are miles of extension cords, dozens of structures they built from scratch and as for how many lights... well they’re not sure how many there are.

“They say if you know how many lights you have then you don’t have enough,” Greg says.

Lights on Chestnut draws as many as 1,000 cars a night. The streets can get so full that Sharon Wilz reflects on times when they have had to off-road just to get to their house. Their giving spirit doesn't stop with the displays either. The families often dress up in festive costumes and hands out treats to who ever wants to stop by.  Greg even grows his own white Santa beard for the kids. One particularly busy season managed to gobble up 13,000 candy canes in a few weeks.

As the Wilz's hand goodies through car windows, they hear of family traditions they started, see the fresh excitement of people who are there for the first time, and even the occasional proposal right in their front yards.

“The community has just been amazing to us. We have some really touching stories out here,” Davina says. “There was a little old man that would come out here every day at 5 o'clock. So we made him a custom candy bar for him to tell him he’s our best customer ever because he did this for about three weeks in a row. The candy bar said ‘Lights on Chestnut’ and when I took it to him he told me that he comes out here every night because it reminds him of his wife. She had just passed away and he said these lights always made her happy.”

This is why Lights on Chestnut has been lighting up the skies of Lincoln for 11 years now. They say as long as they are healthy and able the lights will still go up. Through blizzards that knock out hundreds of thousands of lights, they will go up. Even when they are out of the country on deployment, like Gigi has been for two years now, they will go up.

“While we all miss Gigi, we know that her service to our country is important and what she has been called to do," Greg says. "Our sacrifice of not having her home for the Christmas season turns into additional family pride knowing she was in aid to the people of Puerto Rico after their worst hurricane in their history. Service to others is what started this whole thing.’”

So make some time to visit the dueling lights (and keep your eye out for Santa, who can be seen handing out goodies) because this family competition is long from over.

Lights on Chestnut was featured on ABC’s “The Great Christmas Light Fight” on December 11.

Lights on Chestnut Address and Times:

* However. they have been known to run later on busy nights/weekends!